The College has two Level 2 (220V) charging ports at North Campus in Salisbury and two identical ports at South Campus in Concord. Their installation was partially funded by Duke Energy, whose grant program is helping to fund 200 charging stations for public use across North Carolina. 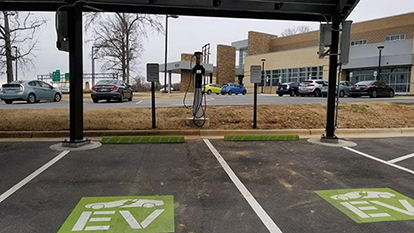 Rowan-Cabarrus also has EV charging stations that are used exclusively by its automotive programs for charging the electric cars used for instruction.

The Rowan-Cabarrus charging stations, which are open to the public, are managed by ChargePoint, which operates a nationwide network of stations and includes the College’s locations on its comprehensive map. The stations also are listed on other EV charging station locator maps. Rowan-Cabarrus currently charges $1 per hour for charging from its stations, with the revenue used to offset the cost of electricity and administration.

“We are pleased to be able to provide these EV charging stations for public use. We continue – during Earth Month, on Earth Day, and throughout each year – to do all we can to be good stewards of our planet,” said Jonathan Chamberlain, chief officer of the Division of College Environment at Rowan-Cabarrus. “Rowan-Cabarrus is committed to environmental responsibility and is proud to consider alternative energy sources.”

The installation of the EV charging stations aligns perfectly with the College’s overall commitment to sustainability. In partnership with the Rowan-Cabarrus Community College Foundation, the College currently has a 315-kilowatt rooftop array on two buildings at its North Campus, designed to produce an estimated 425,000 kilowatt hours of energy per year. The second phase of this project will add roughly 700-kilowatt in capacity to the rooftop array. The Rowan-Cabarrus Foundation also has partnered with Renew Petra to construct a one-megawatt, ground-mounted array on six acres owned by the Foundation adjacent to the College. The combined systems will generate roughly two million kilowatt hours of clean energy per year and generate an estimated $80,000 for student scholarships and sustainability investments.