Resonado, an award-winning startup, develops audio systems with its patented Flat Core Speaker (FCS) technology that allows speakers to be lighter, thinner and more sustainable than traditional cone-shaped speakers, without sacrificing sound quality. The company’s products have generated interest from a variety of clients in the automotive, home audio, consumer electronics and marine industries.

“It is so exciting to see Erikc’s entrepreneurial success. We consider Rowan-Cabarrus Community College to be the launching pad to a prosperous future, and he appears to be well on his way,” said Dr. Carol S. Spalding, president of Rowan-Cabarrus. “We are honored to be able to give our students the educational foundation to move forward and accomplish great things.” 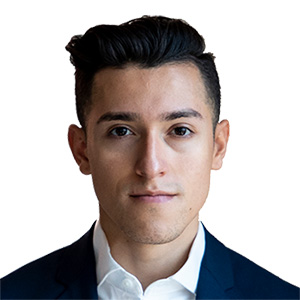 Perez-Perez, 22, grew up in Mint Hill and Midland, N.C., choosing the Rowan-Cabarrus Early College program because he had never really felt challenged in school. “I felt it was something I needed in order to grow and discover more opportunities,” he said. “I learned what to expect from college-level classes and how to work with professors, who are very different from high school teachers.”

After graduating from the Early College in 2015, Perez-Perez set his sights on Notre Dame because of its prestige and rich history. “I knew it was where I wanted to get my four-year degree as soon as I stepped foot on campus,” he said. “Attending Notre Dame was an amazing and fulfilling experience that exceeded every single one of my expectations.”

It was at Notre Dame that he met his Resonado co-founders, Brian Cho and Peter Moeckel, at a marketing club meeting. They were looking for a marketing partner, and Perez-Perez, a marketing major, joined the team the next day. The three worked around the clock to build the company, pulling all-nighters and often jetting to Silicon Valley to meet with investors in the midst of managing classwork and exams.

In spite of their hectic schedule, the group has managed to turn Resonado into an award-winning company that continues to gain traction with customers. The company has won several notable awards, including two top prizes in Notre Dame’s McCloskey Business Competition and second place in the prestigious Rice Business Plan Competition, which netted nearly half a million dollars in prize money. Perez-Perez also was recognized by the Mendoza School of Business as one of its three high-potential students on campus and was featured in videos and news articles.

Today, Resonado’s main office is in South Bend, Indiana, near Notre Dame, with a second office in Boston and a third in San Francisco, where Perez-Perez now resides.

Perez-Perez plans to continue focusing on the growth of Resonado for the next few years. Then, he wants to tackle the creative world as a visual artist, exploring his interest in photography and possibly launching his own fashion brand.

A first-generation college student, his family has been there to support and cheer him on throughout his educational and business journey, which Perez-Perez said has been crucial to his success.

“The single biggest factor in achieving anything in such a high-risk world is having passion and perseverance,” he said. “The key to being able to do that is having a rock that can hold you down. While you’re shooting for this immense dream, you still need to stay realistic. For me, that rock has always been my family. They have kept me grounded while at the same time believing in me and providing constant support for the pursuit of all my ambitions.”