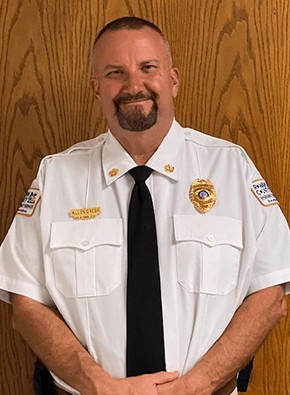 Meet Rowan County Emergency Services Chief Allen Cress, who started his career as a volunteer firefighter in high school and fell in love with the idea of giving his time to help someone else. “I started at a time when the fire and EMS service in North Carolina was growing. Since the job I had paid a lot more that a career firefighter or EMT was making and my family was growing, I had to wait for the pay scales to get a little closer together. Once they did, I became a telecommunicator for 9-1-1 while still serving my fire department. The two paths grew together along with the knowledge I received from Rowan-Cabarrus Community College, and I quickly realized that this was my career path. You will either know this is what you want to do or you won’t. It’s a tough profession, and it’s not for everyone. The only constant in the emergency services/public safety field is that nothing is ever constant.”

Cress has been honored by the Rowan County Fire and Rescue Association for service and dedication, received the N.C. Association of Public Safety Communications Officials Line Supervisor of the Year Award and was named Communications Center Leader of the Year. He is the current vice president of the North Carolina chapter of the National Emergency Number Association.

When he’s not working, Cress enjoys rebuilding old cars and attending car shows. He has been married to his wife, Bonnie, for 28 years, and they live in the house Cress grew up in. They have three children and six grandchildren.