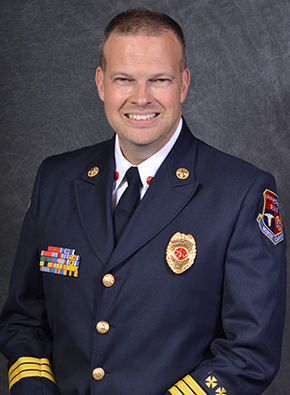 As chief of the Kannapolis Fire Department, Tracy Winecoff is fulfilling his dream of following in the footsteps of his father, who was a volunteer firefighter. He says one of the best parts of his job is helping others reach their goals, just as his own mentors did for him. “Public safety is based on a servant’s heart. If you find yourself continually sacrificing your time and energy to help others, this could be a very rewarding career.”

Winecoff received fire, EMT, paramedic, and other rescue and public safety training at Rowan-Cabarrus and says the college’s ongoing continuing education opportunities have helped him develop his career.

In addition to serving as Kannapolis fire chief, he volunteers with Locke Fire Department, serves on the Rowan-Cabarrus Community College Fire Protection Advisory Board, and is a member of the N.C. Association of Fire Chiefs and the International Association of Fire Chiefs. He has been a member of Leadership Cabarrus and is a graduate of the UNCC Fire and Rescue Management Institute.

Winecoff lives in China Grove with his wife, Nichole, and son Brayden. When he is not working, he enjoys spending time at his family farm.